Mumbai is the world's future. One of the world's "megacities," Mumbai has 25 million people and counting.

Befitting a world dominated by finance capital, Mumbai is a bundle of contradictions. People without potable water or toilets live in shacks built in the shadows of billionaire penthouses. Garbage is omnipresent, and it is left to poor people who dominate the recycling business to deal with the throwaways of the rich. Money exists both in real time, mostly in dog-eared rupees, but also in electronic transfers that live in an increasingly powerful parallel universe.

Bob and I had the good fortune to see a fascinating exhibit while in Mumbai, by artist Chandrakant S. Ganacharya, that speak to these contradictions in new ways that force the viewer to question and think. Isn't that one of the purposes of art?

Titled “#MONEY*FOOD@LIFE,” the exhibit uses the language of daily life to explore themes of hunger, struggle and power.

Like many, Ganacharya is a transplant to Mumbai. His work speaks to the city’s realities, in particular the omnipresence of money. Those who have it, and there are many, flaunt it; those who don’t are, of necessity, preoccupied with getting enough to live. 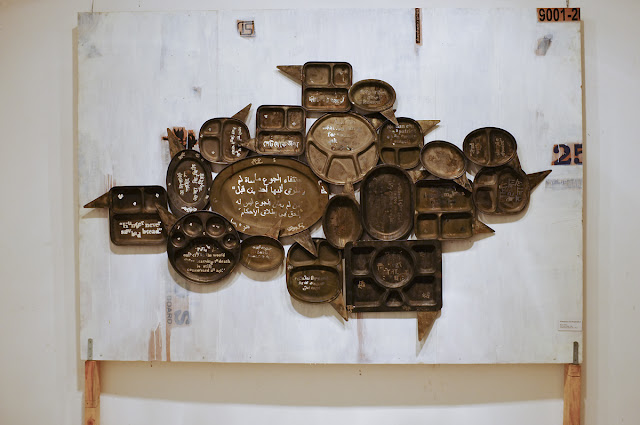 Pictured here is a photo I took of “A Dictionary of An Empty Belly” — a multilingual reflection incorporating variations on well-known phrases and painted on rusting, metal food plates that evoke memories of India’s colonial history. Some of the English phrases:

• Ask not what you can do for your country, ask what is for supper.

• No man can be a patriot on an empty stomach.

• Paris is the only city in the world where starving to death is considered an art.

I often feel alienated from some gallery exhibitions, a combination of a lack of formal background in art, a preference for publicly accessible art (rather than art sanitized and hung in eerily silent museums or galleries), and a predilection for art that resonates with the concerns of the day. At Ganacharya’s exhibit, I was mesmerized, both by the quality of the art and how his work powerfully spoke to the Mumbai reality we saw on the streets.

While at the exhibit, we met Ganacharya. He seemed surprised, and pleased, to see U.S. visitors. (There don’t seem to be many U.S. tourists in Mumbai, and those we saw invariably were part of large tour groups with scripted itineraries). Ganacharya asked to take photos of us, and in turn he agreed to be photographed.

If you get the chance, visit his Facebook page: Chandrakant S Ganacharya. Here are several more photos, by the artist.