LESSONS FROM MEDELLIN: How the murder capital of the world became a poster-child of urban innovation 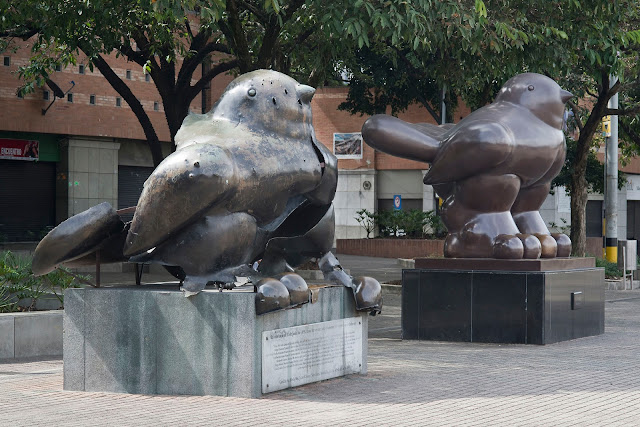 In early September, days before my husband and I were to leave for Medellín, Colombia, for three months, we watched the Netflix series Narcos. In graphic detail, the series shows how drug king Pablo Escobar unleashed an era of death and destruction that made Medellín the murder capital of the world.

Bob and I turned to each other, wondering, “Are we nuts?”

A few weeks later, we travel to Comuna 13, once considered Medellín’s poorest and most dangerous neighborhood. We use Medellín’s bike-share system (which is free) to get to the metro. We pay about seventy cents to take the metro to Comuna 13, then another forty cents to take a bus to a free escalator system that zigzags up the neighborhood’s steep hills, climbing the equivalent of a twenty-five-story building. Later, we ride up a 1.7-mile gondola system in another hillside section of Comuna 13, which has cut travel time for workers from more than an hour to less than ten minutes. An integral part of the city’s mass transit system, the gondolas can transport more than 3,000 people per hour.

Medellín was the first city in the world to use gondolas for public transit, and also the first to use escalators in a residential neighborhood. Its mass transit also includes a metro, dedicated bus lanes and, beginning recently, light rail.

In Wisconsin, where Bob and I are from, one of Governor Scott Walker’s first acts was to reject the federal government’s $810 million subsidy for high-speed rail. It’s impossible not to ask why this city in a supposedly “developing” country is so far ahead of some places in the United States, including my own city of Milwaukee.

It’s a beautiful Saturday afternoon—every day seems like spring in Medellín, where daytime temperatures hover in the seventies the entire year. Carolina Andrea Ramírez, a high-energy thirty-four-year-old single mother of Afro-Indigenous descent, is taking us on a tour of Comuna 8 in the city’s eastern hills.

Medellín, whose 2.4 million residents make it Colombia’s second largest city, has sixteen Comunas, or sections of the city. Comuna 8, with a population of about 135,000 people, is one of the poorer sections.

Ramírez was born in Comuna 8, lived on the streets from fourteen to twenty-eight years old, and now lives again in Comuna 8 with her mother and two teenage sons. About a year ago, she formed a local nonprofit, Corazón de Leon (Heart of the Lion), which focuses on “providing another option than drugs for young people,” such as art, music, sports, and Saturday afternoon classes.

On this particular day, we meet Ramírez beneath the construction of a gondola transit system that is to begin in Comuna 8 next year. We walk up, the roads giving way to stairs, which give way to dirt paths. As we hike, we pass homes that many might dismiss as shanties. Before long we enter a green-belt area with “eco-parks,” playgrounds, organic garden plots, and a cobblestone-like path to the top of a hill known as Pan de Azúcar (Sugar Bread), which has one of the best views of Medellín.

The projects are part of El Jardín Circunvalar, loosely translated as The Circular Garden, which in turn is part of a green belt being built in Medellín’s hills. As we walk, I try to think of a similar, multi-faceted project in a poor Milwaukee neighborhood, especially a publicly funded and controlled project. I can’t.

What come to mind are the Civilian Conservation Corps projects of the New Deal. Like those projects, El Jardín Circunvalar focuses not just on the final project, but on providing jobs; of the roughly 780 people employed in building the project, 600 were neighborhood residents. The plaque commemorating the opening of an eco-park in Comuna 8 lists not just the usual government officials involved, but also the names of the workers.

Three years ago, the eco-parks, playgrounds, garden plots, and stone path to Pan de Azúcar did not exist. They reflect what is termed “social urbanism” in Medellín, which refers to comprehensive, holistic public projects that link public transit to green-space to libraries, cultural projects, parks, sports facilities, schools, and daycare centers.

These efforts have drawn international recognition, including a 2013 “Green Prize” from the Harvard Graduate School of Design and a 2012 “Innovative City of the Year” award from the Wall Street Journal and Citi. But what makes Medellín stand out is that its most ambitious projects have been in poorer neighborhoods.

Government-sponsored websites explain the city’s projects, invariably in glowing terms. But I wanted to get the perspective of a local resident. Bob and I return to Comuna 8.

As we sit on a hill overlooking Medellín, Ramírez explains that “everything in Medellín is very complicated.” Echoing a widely held belief in a country infamous for political corruption, she believes that all politicians “are rats.” The difference, she says, “is that in Medellín the rats are also doing good things.”

Asked for specifics, she mentions improvements in education, in daycare centers for working mothers, in public parks, in the gondola that is being built. “Most of the people in Comuna 8 work far away, so the transit is very important,” she says.

But, she adds, it’s more than the specific projects; her experience living on the streets taught her the importance of believing in a better future. “Now,” she says, “there is more hope. There are smiles on the faces of the children.”

When Pablo Escobar was killed in 1993, Medellín was in disarray. Besides the violence, the city was sharply segregated. Entire neighborhoods were considered “no-go zones,” dangerous for residents and visitors alike. There was a growing consensus that Medellín, an industrial and economic linchpin of the entire country, had to change.

The push for a new Medellín got a significant boost with the opening of the metro in 1995. But the election of reformer Sergio Fajardo as mayor in 2003 was a watershed, and Fajardo has become an iconic symbol of Medellín’s transformation. Even today, political candidates seek votes by proclaiming: “I am a Fajardista.”

Fajardo is a charismatic professor and journalist turned politician who graduated from the University of Wisconsin-Madison with a doctorate in mathematics in 1984. He was elected as part of a civic movement independent of the major parties.

Fajardo’s status is partly due to the pace of change during his mayoral term from 2004 to 2007, before he went on to become governor of the state of Antioquia. Most important, Fajardo and his civic movement disrupted the normal way of doing business in Medellín. They weren’t interested in showcasing architecture or splashy projects designed to give Medellín a new international image. They saw architecture, design, and innovation as tools of social transformation.

Upon taking office, Fajardo highlighted three main problems: inequality, violence, and a culture of corruption. He pledged a commitment to education, transparency and anti-corruption, and the importance of public spaces and civic involvement. “Our most beautiful buildings must be in our poorest areas,” he noted.


Some of the many projects initiated during Fajardo’s administration include rebuilding the city’s Botanical Gardens (which are free); building and renovating schools; expanding public parks and plazas; completing and extending the gondola system; and developing library parks, which combine libraries with green space, a concept that has since spread to other Latin American countries. Many of the projects were developed with input from publicly funded community councils.

In Medellín’s San Javier district, up the hill from the metro station in Comuna 13, is a library park “Parque Biblioteca Presbítero José Luis Arroyave,” named after a priest who advocated for peace and was gunned down by paramilitary forces in 2002. Murals along the street give way to a winding path and green space, which give way to an organic garden, sculptures and, at the top, the library’s entrance. Inside, the complex is part library and part community center, with initiatives ranging from young children’s art projects to an oral history project involving long-time neighborhood residents.

Today, Comuna 13 is known for its range of innovative public projects. But it has a darker history. In a country where military/paramilitary/rebel/gang/drug violence has been the norm for more than half a century, the neighborhood holds special significance as the site of Colombia’s most infamous military invasion of an urban area—Operation Orion, in 2002.

At the time, Comuna 13 lacked even the pretense of government control. Leftwing rebels had gained a foothold and provided a semblance of oversight, but were constantly under attack from military and right-wing paramilitary forces. In October 2002, Colombia’s conservative president ordered a military offensive to oust the rebels. Thousands of soldiers and police attacked, supported by armed helicopters in the air and paramilitary forces on the ground. The area’s roughly 100,000 residents were caught in the crossfire. After a week of intense fighting and house-to-house searches, right-wing paramilitaries took control of the neighborhood.

No one knows exactly how many people died in the attack and its aftermath but figures range upwards of seventy people. Several hundred were injured, many of them civilians. During and after the offensive, the paramilitaries adopted a practice of “disappearing” people suspected of leftist sympathies. Estimates of “disappeared” civilians range as high as 300 people.

Today, Comuna 13 is home to not only the library park but also the metro, gondola, escalators and increased social, education and cultural services. Street-level murals at the base of the library park speak to the neighborhood’s history. The art is stunning and the messages are clear. “No more military intervention,” says one mural. “We are Comuna 13, where memory and life are present,” says another. Referring specifically to the disappeared, one of the murals pointedly asks: “Where are they? Truth, justice, and reparations.” 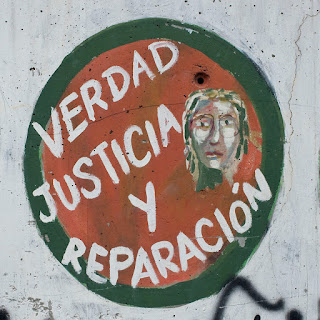 Comuna 13 is just one example of how the Medellín of 2015 is significantly different from the Medellín of 1995. Foreign investors have taken note. Adding to Medellín’s history as an industrial center, the city’s tech sector is now the third largest in Latin America. Hoping to take advantage of Medellín’s increasingly educated but still low-paid workforce, companies such as Google, Facebook, and IBM have set up shop.

Some critics have dismissed Medellín’s changes as window-dressing that leaves basic structures intact. Cocaine is still a big business. Unemployment, drugs, and gangs remain huge problems. Poverty has decreased, but the gap between the rich and poor has increased.

Still, there is no denying the progress and the disruption of business as usual. And at a time when privatization and public dollars for private projects dominate government initiatives across the globe, Medellín is an anomaly.

Where will it lead? Nobody knows for sure. For now, Medellín’s past and the promise of a new future co-exist; the outcome is not clear.

In 1995, a bomb was placed in the plaza inside a ten-foot bird sculpture by Fernando Botero, a well-known Medellín artist. The bombing killed an estimated thirty people who were attending a music festival at the plaza and injured hundreds more. No one claimed responsibility and no one was ever arrested.

The destroyed artwork was left standing, a reminder of Medellín’s history of violence. In 2000, Botero made a new sculpture similar to the original, calling it “Homage against Stupidity.” The two birds stand side by side.

Barbara Miner is a Milwaukee-based writer and photographer.

This article originally appeared in the December-January issue of The Progressive magazine. The Progressive has been writing about issues of peace and social justice since 1909. To subscribe, go to: www.progressive.org