Life and death along the Varanasi Ghats

There are 87 Ghats in Varanasi, India — steps leading down to the river Ganges. Most of the Ghats are for cleansing and prayer rituals, but a few are for cremation.

I had incredibly mixed feelings when I first walked by this corpse. My first reaction was part denial, part repulsion. After walking by several times during the course of the morning, and seeing the reactions of Indians, and trying to better understand the Hindu approach toward life and death, my feelings became more complicated. 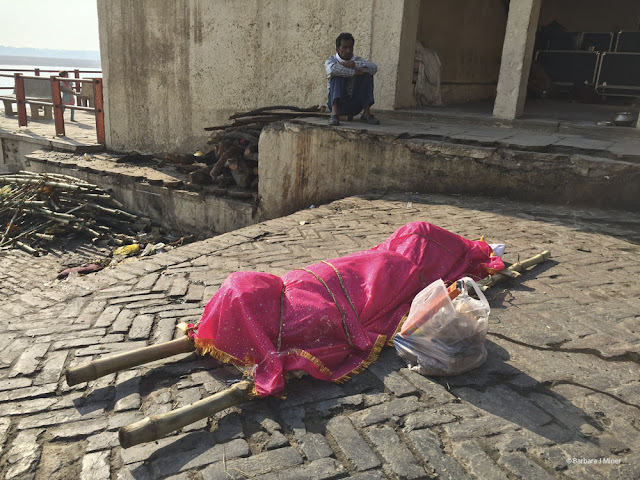 And then two Indian women were nearby when, on what was my final walk past the corpse, I bowed, put my folded hands to my forehead and mumbled “Namaste.” The women immediately and prominently motioned to me, and gave the universal symbol for me to take a photo. Which I found strange. But then I realized that most of the Euro-American tourists, especially older tourists, don’t walk along the Ghats but stay at a safe, antiseptic distance, watching from boats along the Ganges.

There is so much I don’t understand about India, and so many contradictory feelings and concerns. If one were to ask me what I think of India, I’m not sure I could articulate all that is swirling in my head.

But one thing is clear. India is a deeply religious country, where one’s religion is practiced in public. And Hinduism, the dominant religion, approaches death as a normal part of life. I came to see the corpse not as a corpse, but as a person going through their life cycle.

I worried about taking what might be yet another “exotic” photo of India. (I have come to hate that word, too often redolent with connotations of viewing anything different from the European-American norm as somehow strange or inferior — or, at the other end of the spectrum, an example of “the noble savage.”)

But after a while, many things that at first seem strange or different are, in the end, mostly that: different. Not better, not worse, just different.