Lake Effect contributor Barbara Miner speaks with pastor Lisa Bates-Froiland and musical director Aaron Musser from Redeemer Lutheran Church in Milwaukee about how they plan to commemorate the one year anniversary of Johnny Smith being killed on their steps. An audio feature, which aired on Milwaukee's public radio, WUWM,on March 27, 2020.

Following is the transcript. Segments from the Requiem are played as part of the audio file. 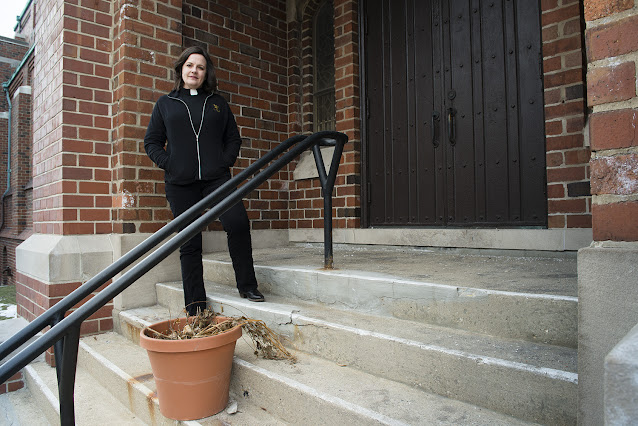 Pastor Lisa Bates-Froiland on the steps where Johnny was murdered

This weekend will mark one year since a homeless man was found beaten to death on the steps of a Milwaukee church. Johnny Smith, 53, was found dead in his sleeping bag outside Redeemer Lutheran Church on March 29.

The congregation was deeply impacted by the tragedy and this weekend had planned to honor Smith with a special service. But, like many other churches, Redeemer Lutheran has been forced to close to the public. However, the service will still go on virtually.

Lisa Bates-Froiland is pastor of Milwaukee’s Redeemer Lutheran Church at 19th Street and Wisconsin Avenue. She remembers clearly the day her life as a minister changed forever: March 29, 2019.

"It was a Friday morning, I was looking forward to a day of unscheduled time, when I looked down to my phone and saw I had several messages," says Bates-Froiland.  "And it made my heart just sink. Coming to grips with the fact that someone had lost their lives while sleeping under the protection of the alcove by our east steps, was very difficult."

It turned out that both men involved suffered from untreated mental illnesses. The church has decided that it will raise funds to open a mental health clinic to serve the community.

Aaron Musser is Redeemer Lutheran's musical director. He has been composing the choral music for Johnny Smith's service called "Requiem for a Homeless Man".

"The Requiem, essentially, is an ancient Latin rite that commemorates the soul of one who has died. And it is meant to acknowledge this person who is gone and to say, Lord please have mercy on them, give them rest. And that is what the word requiem means. It is Latin for rest," says Musser.

Due to the coronavirus pandemic, the in-person service will now take place May 3. On Sunday, the virtual choral arraignment can be found on Reedemer Lutheran's website.