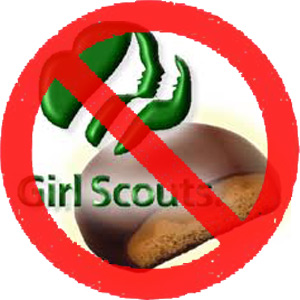 As if targeting the nuns wasn’t enough, the Catholic Church is now going after the Girl Scouts.
What’s next? Denying communion to women who use birth control?
The Girl Scouts’ alleged sin is that it has worked with Planned Parenthood to provide fact-based information on sexuality, puberty and reproduction.
The church, locked into a mind-set that sees little moral difference between contraception and murder, caved to pressure from right-wing fringe groups and decided to investigate the Girl Scouts.
The church’s investigation has been going on for two years. One would think that would be enough time to find out if the scouts truly are leading young women to hell. Apparently not.
According to a Washington Post article last week that brought national attention to the inquisition, “In a March 28 letter to his fellow bishops, Bishop Kevin C. Rhoades, chairman of the Committee on Laity, Marriage, Family Life and Youth, wrote that ‘important questions still remain and need to be examined.’”
Among the concerns noted in the Post article: “Last year, a Colorado troop prompted complaints when it accepted a 7-year-old transgender child who was born a boy but was being raised as a girl. Others are upset that the Girl Scouts have materials that provide links to groups like the Sierra Club, Doctors Without Borders and Oxfam, some of which support family planning and contraception.”
In the Milwaukee area, one of the complaints centered on a Girl Scout patch honoring Dolores Huerta — an iconic civil rights leader who, along with Cesar Chavez, co-founded the predecessor to the United Farm Workers. Huerta’s moral downfall? In 2007 she received an award from Planned Parenthood for “her life’s work advancing women’s rights.”
The right-wing attack against the Girl Scouts — with the U.S. Bishops now providing both support and cover —is led by an obscure but tenacious group known as C-FAM (Catholic Family & Human Rights Institute). The group was founded in 1997 to monitor the United Nations, in particular programs that promote family planning or defend the rights of those who do not conform to a heterosexual lifestyle. C-FAM, to put it mildly, is a bit kooky.
Jay Bookman, a columnist and blogger at the Atlanta Journal-Constitution, describes C-FAM this way:
The Catholic Family and Human Rights Institute is a deeply right-wing organization that sees itself as a watchdog against U.N. incursions on our national sovereignty and against U.N. attempts to subvert American and Catholic morality. According to its website, C-Fam’s “vision” is “the preservation of international law by discrediting socially radical policies at the United Nations and other international institutions.”
Back in 1633, the Church condemned Galileo for asserting that the Earth revolves around the Sun. He was told he must recant or be burned at the stake. It wasn’t until 1992 that the church admitted it had erred and that Galileo was right.
The Church’s condemnation of Galileo was part of the Church’s Inquisition into heresy — a catch-all term to describe any view by a Catholic that does not conform to official church dogma.
Today, Planned Parenthood is the new Galileo, contraception is a modern-day heresy, and the Church is standing firm in its inquisition.
The current Pope, Benedict XVI, is sometimes referred to as “God’s Rottweiler” for his work as an enforcer of conservative doctrine while Prefect of the Congregation for the Doctrine of the Faith —an organization within the Vatican which was once known as The Inquisition.
— — —
This blog is cross-posted at Milwaukee Journal Sentinel, Purple Wisconsin.
Image collage by Barbara J. Miner.