From "Recall Walker" to "Question Austerity." A movement continues.


Forget the 30-second sound bite. Lane Hall needs to figure out his message in 20 characters or less.
“Even a tweet is too long for what we do,” Hall jokes.
Hall is a co-founder and driving force in the Overpass Light Brigade —an all-volunteer gathering in Milwaukee that comes out at sunset and shows up at pedestrian passages over the freeway to hold well-lit placards and send messages to travelers below.
The group started last fall with a six-letter message — RECALL.
On June 6, the day after Gov. Scott Walker won the recall vote, the brigade refused to be disheartened. That night, their message was summed up in 15 letters: “We Shall Overcome.”
That spirit endures. “The effort, interestingly, has grown and deepened since the recall,” Hall notes.
Once or twice a week, the Overpass Light Brigade continues to gather above the freeway. Sometimes it’s on the South Side at Warnimont Avenue, sometimes on the North Side near Atkinson; sometimes in nearby suburbs such as West Allis; occasionally in other cities such as Madison or Fond du Lac.
The message changes, depending on the issue of the day. Recent favorites: “Question Austerity,” “Healthcare for All” and “Boycott Palermos,” in support of the strike at the pizza-maker.  What doesn’t change is the group’s fundamental mission: to bear witness using a unique blend of artistic creativity, old-fashioned activism and contemporary social media — fueled by human commitment and a hefty supply of LED lights and double-A batteries.
NEITHER ICE NOR 90-DEGREE TEMPERATURES…
On a recent 90-something degree day at the Alterra’s coffee shop on Humboldt Boulevard, Hall talked about the beginning and future of the Overpass Light Brigade. Dressed casually in plaid shorts and a loose-fitting collared shirt, he spoke softly, humbly and eloquently about the brigade. His demeanor is more befitting a parish priest than a political activist.
An artist by training and inclination, Hall would not have predicted how a small, personal act last November mushroomed into a movement with near-cult-like status among the art and activist communities. In his wildest imagination, he would not have guessed that the brigade would garner national media attention, from the New York Times to CNN to Rachel Maddow and The Ed Show on MSNBC.

Hall, a 56-year-old professor in the English Department at the University of Wisconsin-Milwaukee, always had a political conscience. But he wasn’t one who took to the streets. “I would never have called myself an activist before Scott Walker,” Hall says.
Like others, Hall was compelled to action by Walker’s 2011 attack on public sector unions and a budget that cut deep into education and social services. When the recall officially began last fall, he knew he had to take a public stand. His artistic training came in handy.
“Art is often a product of certain problems and questions,” he explains. “In this case the problem was that the rally to launch the recall began at 4:30 p.m. But it gets dark at 4:30 in November. So that was a simple design problem — how to get visibility in the dark for your message.”
Hall worked on solving the problem with his wife and collaborator Lisa Moline — an associate professor of art at UWM who is equally integral to the Overpass Light Brigade. They came up with the idea of a string of Christmas lights affixed to a piece of corrugated plastic, powered with batteries and bearing the message “Recall Walker.”
“I had no idea whether it would work or not,” he recalls. “But it worked beautifully.”
Before long Hall and Moline faced a new problem, of how to get their message out to a broader group of people. In the second week of December, they decided to go to a pedestrian overpass above the freeway and attach to the fence a six-letter, six-placard message: Recall.
Milwaukee winters are not pleasant, but Hall explains that it wasn’t the cold that almost scuttled the effort.
An angry passerby, a man in his 30s, started ripping down the signs, saying they were illegal. Moline, not one to be intimidated, started taking the man’s picture to document the destruction.
“You can’t take my picture!” the man screamed.
“The hell I can’t, you’re messing with our property,” Moline replied.
Hall looked over and saw the man trying to take Moline’s camera. “And he has her in a headlock,” Hall recalls, the disbelief still evident more than six months later.
“I remember thinking, ‘This is so surreal. It’s cold, there’s this traffic below, and these weird lights, and my wife and this guy I’ve never seen before are in a fight on the bridge.’”
Luckily, the story has a good ending. The scuffle ends, the man leaves, and he later apologizes.
In the meantime, however, the police have arrived. They tell Hall and Moline their action is legal, but only if people hold the letters. The placards cannot be affixed to the overpass fence.
That legality turns out to be a blessing in disguise. What was a two-person effort turned into a movement as people volunteered — despite the bone-chilling cold on winter nights — to stand and hold the signs.
“We call the volunteers ‘Holders of the Light,’” Hall says of those who carry the placards. “And it made the effort more than just signage or lights on a fence. It became a form of witness.”
As an artist, Hall has always believed the process is as important as the product. And he’s content with how the process has evolved: collaborative, innovative, a loose affiliation of volunteers with no big egos claiming ownership rights to the idea or technology. (Instructions on how to make the signs are available through a post at Daily Kos.
Today, the core group has expanded beyond Hall and Moline to include activists such as recall organizer Jenna Pope and Joe Brusky of Occupy Riverwest. Some volunteers are regular Holders of the Light, others show up for a specific cause or location. The gatherings often take on the feel of a celebration, with scores of people gathering on the pedestrian overpasses.
Future messages will be dictated by events. But, Hall predicts, they’re not done with Walker. “When it’s appropriate,” he says, “we’ll go out with ‘Indict Walker.’”
— — —
The Overpass Light Brigade has a Facebook page, a website and a twitter account: OverpassLightBrigade @OLBLightBrigade. 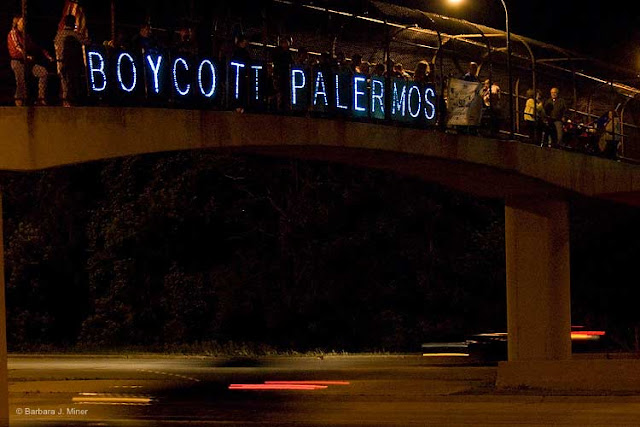 All photos by Barbara Miner.

— — —
This blog is cross-posted at my personal blog, "View from the Heartland: Honoring the Wisconsin tradition of common decency and progressive politics," at www.barbarajminer.blogspot.com. You can also sign up for email notifications at that blog.